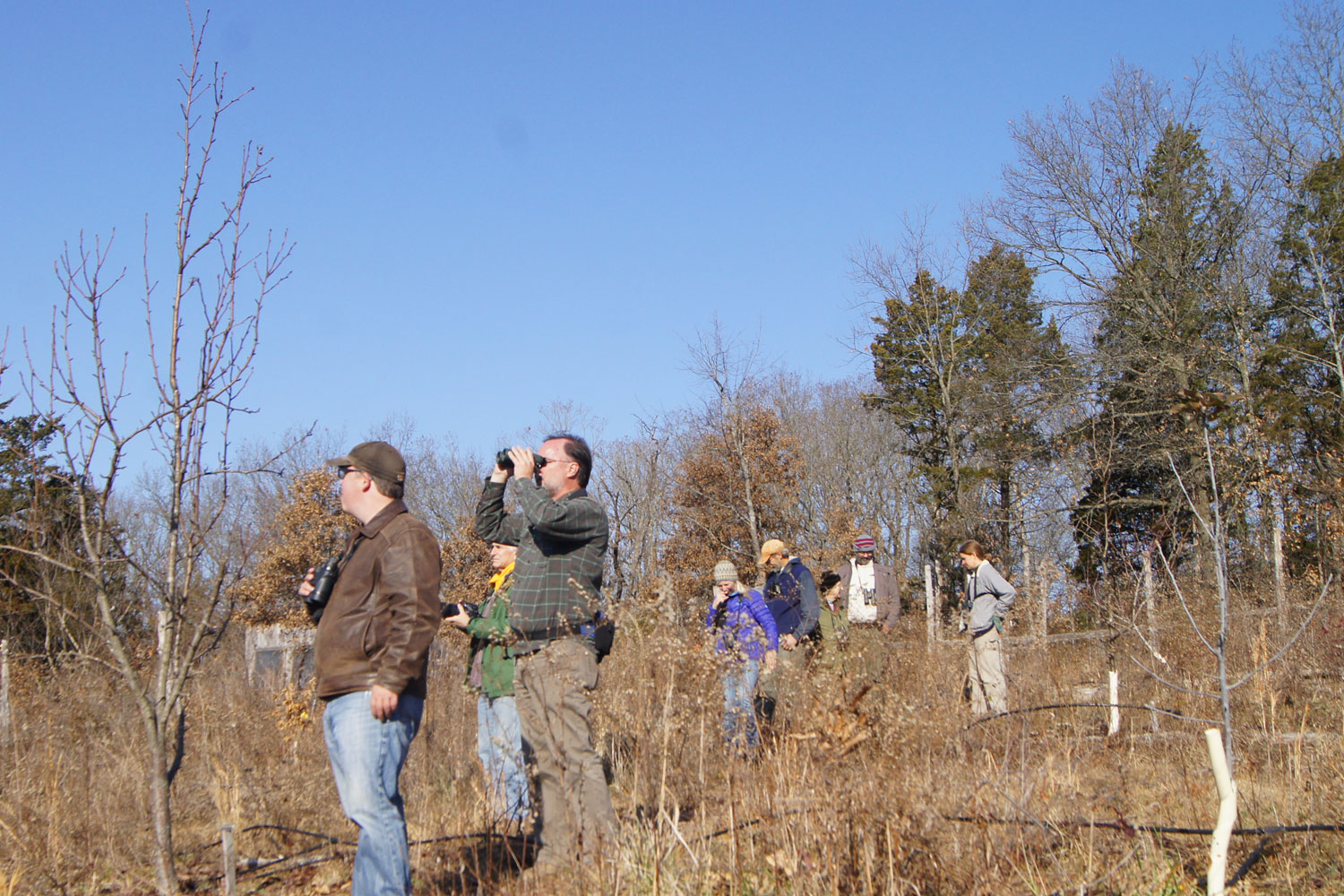 On a sunny and mild early December day, we hosted about a dozen attendees on a CAS field trip to the homestead farm in northern Boone County that Eric and I have managed for the past decade or so. The big find of the day turned out to be a rock, not a bird, but we’ll get to that. We saw a fairly standard collection of late fall/early winter birds with no surprises (22 taxa; ebird list here). The morning did include one mystery species that repeated a single call note from some brush along the pond bank. Several of us agreed that it sounded towhee-like, but not quite; though we tried to find it, the bird eluded us. A day or two later, I resolved the mystery bird as a Hermit Thrush. The call notes of this winter visitor are not as memorable as the unmistakable and hauntingly beautiful song this thrush sings in the breeding season in northern woods. We’ve heard two of its call notes here in winter, the whine and the chup, generally just one or the other at a time in our experience.

Eventually we worked our way up a slope in a section of relatively mature woods. This area is reliable for woodpecker viewing in most seasons of most years, but has been remarkably quiet for the last few months and stayed that way for the field trip. Discussion of this situation produced an interesting hypothesis. Our woods are basically devoid of acorns this year, even though many other trees produced bumper seed crops came (including hickories, honey locusts, and black walnuts—none of which are especially woodpecker-friendly foods). Another attendee noted that his woods, a mere 5 miles or so from ours, had an abundance of acorns this year. Perhaps the woodpecker population moved locally to follow food sources, abandoning acorn-poor zones if acorn-rich areas weren’t too far away. This apparent patchiness of acorn productivity is curious, too, since oaks tend to mast synchronously over a region: Why was there such variability in a small region this year? Our best guess is that our local topography (predominantly in a valley where cold air settles) combined with this year’s particular spring weather might have been to blame. A warm late winter encouraged the early leaf-out and flowering of trees, then March and April cold snaps killed blossoms. We lost many fruit tree blossoms, but some other regional orchards did not. Could similar localized patterns of spring frost damage have affected local oak mast production and thus woodpecker behavior 9 months later?

In addition to watching birds, we spent time talking about plants, the most curious of which was dodder (Cuscuta sp.). During the growing season, this plant looks more like mutant neon spaghetti than a plant, which most people usually think of as something with big green leaves. This is because dodder is parasitic. It selects a host after germination, then twines around the host (attaching to it and extracting sustenance), eventually abandoning its seedling root system. Dodder can’t outsource reproduction to its host, so it still flowers and puts on seeds, both of which are easy to overlook. The first time I found the seed pods in winter, they confused me, because they looked like seeds but were on a goldenrod plant and weren’t goldenrod seeds. Each species of dodder (there are 10 in Missouri) can parasitize a number of different host species. In this patch, which Eric and I noticed a few years ago, the dodder seems to prefer Tall Goldenrod. Fascinatingly, dodder does indeed select its host, as shown in this video. 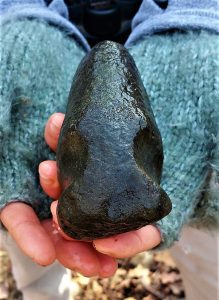 The day’s highlight occurred when we descended to a gravelly stream bank. During a moment of ornithological calm, Eric began describing the recent geological history of the “glaciated Ozarks”, the narrow stretch of land north of the Missouri River that combines Ozark-style topography and bedrock with glacial features such as ice-transported rocks from places far to our north. These “erratics” are scattered across our landscape and within our stream, where we can find diverse non-local specimens including granite, quartzite, and pieces of banded iron formation. While Eric spoke, I looked for an example, though I wasn’t sure of success because we often collect erratics as ornamental edging for a cactus garden; we joke that this is geological invasive management. I scanned the ground for dark or especially rounded rocks and found one: a dark, mafic rock about the size of a fist just submerged in the water. As I turned it in my hand, it became clear that this was more than an ordinary erratic: This was an artifact.

The piece, it turns out, is a ¾ grooved ax. According to a knowledgeable friend of an attendee, its age is probably Late Archaic or Early Woodland; such an ax would have been used mainly for chopping trees. Beyond that, we know little (though Charles Mann’s book 1491 has given us a better appreciation of this continent’s fascinating human past). The ax is the first artifact we’ve found made of non-local igneous rock, but we’ve collected quite a few pieces of worked chert (flint). Each artifact we find is a reminder of the long history of humans here before us. – by Joanna Reuter