Columbia Audubon would appreciate your support during the annual CoMoGives fundraiser Dec. 1–31. To donate, go to comogives.com; for more information, see the following story in this newsletter.

On Friday, December 17, 2016, I was sliding off an icy Grindstone Parkway while trying to get home when the first call came on my cell phone: “You have got to cancel the Christmas Bird Count”. I made it home and saw on the news that children were still at school because there was no way to safely get them home; maybe the weather would be better on Saturday? While I watched the news in the family room the e-mails were piling up on my computer in the bedroom. Finally, someone called and said “you have to make a decision whether to call it off, look at the e-mails”.  It was clear that I would be the only one out there, probably in a ditch, and so I called it off, even the chili supper. Five days later a gallant team of leaders with some substitutes took a weekday off work and counted, but there was no chili supper that year.

It should be different this year, on Saturday, December 16th.  All 13 of the team leaders are ready to get out there again, hopefully with better weather (no freezing rain). There will be a chili supper at which we record the number of each species found this year on the list of species one could expect to find in this area at that time of year. Every team gives the number of birds found for every species, one at a time. It’s a kind of contest with somewhat predictable outcomes; then comes the final push of the computer button to total the number of species found. Will we get over 100 species this year? Even if we don’t, we’ll have a great chili supper.

If you’re new to this annual ritual and wish to join us, call me at 442-3703 and leave a name and phone number. I’ll know who is looking for team members and will find you a spot. – by Laura Hillman, President

Official meeting minutes will be posted to the website after approval at each subsequent board meeting, meaning they are delayed from immediate publication. Below is an unofficial summary of business discussed and conducted on November 15, 2017.

Welcoming a new young birder to the CAS community 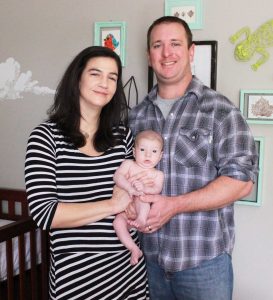 Board member Lori Turner and her husband Frank welcomed Isaac Franklin Turner into their lives on September 20th, weighing in at 7 lb 4 oz and 20 inches long.

For the past six years, Laurie Shawver has been a regular on Ol’ Clark’s weekly Wednesday birding excursions. Laurie died October 17 and the Wednesday trips are a bit less meaningful without her. Despite more than her share of illnesses, Laurie, 61, seldom missed a Wednesday unless it was to visit her three children scattered from West Texas to Virginia or to help with projects of the Southern Boone High School Boosters Club. She and her husband, Charles, who survives, did their own bird trips to over 500 MDC sites and state parks, and other hot spots as they traveled to visit kids. Her bird lists were quite impressive. She had excellent hearing and knew what she heard, a perfect birding companion for Ol’ Clark, who can’t hear it thunder. Laurie, a native of Iowa and a retired registered nurse, died in Big Spring, Texas, where she had been helping her older daughter, Katy, a school teacher, who recently gave Laurie and Charles their first grandchild. Birding was better with Laurie aboard. Her seat remains vacant for a month as tribute to an excellent birder, mother, wife and community supporter. – by Bill Clark ©2017. This column first appeared at https://www.patreon.com/Yeoldclark

The Chat is published online on the first of every month from September through May. Submissions are welcome, including photographs, stories, and suggestions for content; please contact News Editor Eric Reuter. The submission deadline is the evening of the fourth day before the end of the preceding month (28th of January, March, August, October, and December; 27th of April, September, and November; 25th of February).