This 78-acre area lies along Cedar Creek northeast of Columbia. The site originally consisted entirely of coal strip mines, but was reclaimed during the 1990s by the Missouri Department of Natural Resources. Areas were regraded, limed, fertilized and seeded with native grasses and trees. CAS manages the grassland with periodic prescribed burns. The result is a mixed landscape of prairie and wetlands that attracts species of wildlife that require open habitats. Other habitats include riparian forest along Cedar Creek, and several ponds.

The Albert Area is located about ten miles northeast of Columbia, along Cedar Creek. From the intersection of Route Z and Route HH (at the “town” of Murry), turn east on Rob Cook Road, then take the first right on Zaring Road. Follow Zaring Rd south and then east until you reach a gated drive on the right just before a low-water bridge. This drive (shared with a neighboring landowner) follows the west boundary of the Albert area until it reaches a second gate, which leads to the interior of the property. These gates are normally locked. Visitors can park along Zaring Road and access the area by foot, or contact members of the CAS Board or Nature Areas Committee to arrange to have the gates opened. 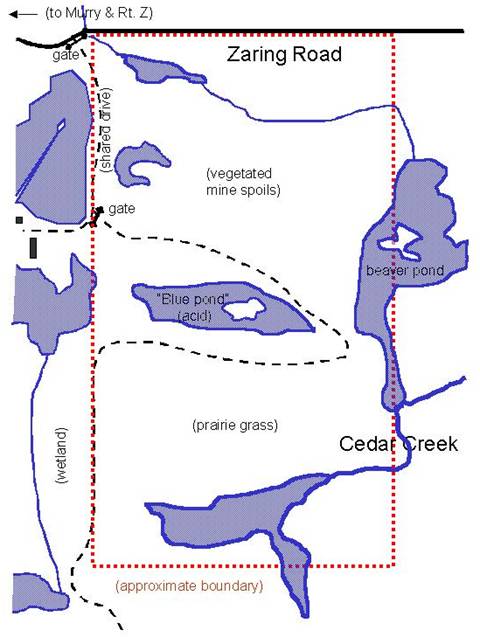