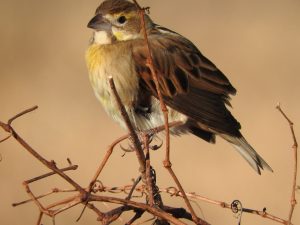 On December 16, members of the Columbia Audubon Society and other volunteers fanned out across Boone County to participate in the 118th Christmas Bird Count. Weather conditions were mild, with a slight breeze in the morning hours and high temperatures reaching the low 30s. On the day of the count, we collectively detected 96 species including a Dickcissel, uncommon in winter months in Missouri, and a rare Brewer’s Blackbird. The Eagle Bluffs Conservation Area teams witnessed 18 Virginia Rails and 12 Sora Rails, high numbers for this year. Blue Jays and American Crows may have rebounded from the West Nile Virus outbreak with 364 and 314 individuals respectively. Counters documented 301 Red-Bellied Woodpeckers this year, with section 2S picking up 59 individuals. Notably missing from the count day this year were Wild Turkey and Black Duck. Across the board, duck numbers of all species were low compared to previous years. Similarly, counters documented only one Lincoln’s Sparrow this year.

While volunteers on the count day tallied 684,754 birds of 96 species, an exciting discovery at a local bird feeder during count week netted an Evening Grosbeak. On December 17, volunteers found Wild Turkeys at Rock Bridge Memorial State Park, so these will be tallied as count week birds. These additions increased our total species count to 98. Reports from a local falconer who did not participate in the count indicated a murmuration of European Starlings and the presence of a Peregrine Falcon at Bradford Farm, but the actual date is unknown and counters did not see a Peregrine Falcon during the official CBC. Another highlight came from Past President Bill Mees, who discovered a Nashville Warbler at his feeder in early December, mixed in with high numbers of Pine Siskins. On Christmas Day, the warbler returned and he was able to snap a photo. This is possibly the latest documentation of a Nashville Warbler in December in many years. Unfortunately, Bill’s warbler did not appear during count week.

At the time of this writing, some area leaders had not yet sent in their list of volunteers and details (including miles walked, owling hours, and other information) that the National Audubon Society requests. Over 65 volunteers participated in the 2017 Christmas Bird Count. Aside from the Evening Grosbeak documented from a bird feeder,  we did not have feeder watcher volunteers this year (and haven’t for the past three years). However, with other fun feeder finds during the month, including Boyd Terry’s Rose-Breasted Grosbeak, we should actively recruit feeder watchers for the 2018 Christmas Bird Count.

Since 2016, the National Audubon Society has sent out the full results of the annual Christmas Bird Count electronically. If you are interested in receiving a copy of the national report and your email address is not on file or listed in this year’s roster, please send your email address to Allison Vaughn at allisonjv@yahoo.com before January 12, 2018. Special thanks to Joanna Reuter for her fantastic GIS maps of the count circle and respective areas. -by Allison Vaughn