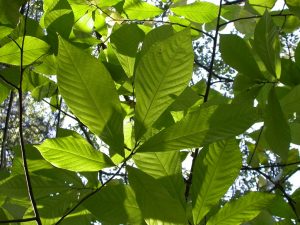 If you’ve taken a walk at the Columbia Audubon Nature Sanctuary this year, you may have noticed an abundance of pawpaw (Asimina triloba) trees in some locations. These like to grow in colonies, generally within an existing understory, meaning that once they get established they can crowd out other species. Although pawpaws are Missouri natives, they belong to a mostly tropical family (Annonaceae) and produce a distinct banana-like fruit that’s quite tasty when ripe. The trees appear tropical, too, with their large clusters of big, distinct leaves.

The modern presence of this “tropical” species  in Missouri is interesting, as some researchers and writers have suggested that the mammals currently inhabiting our forests are ineffective at dispersing the seeds of some North America’s more unusual remnant tree species. This argument is based on the concept of evolutionary anachronism, essentially the idea that now-mostly-extinct mammalian mega-fauna (like mastodons) played an important role in seed dispersal for a variety of plants. In theory, plant mechanisms adapted to rely on such animals don’t really function anymore in the current ecosystem, reducing the plants’ viability and population distribution. This is a really fascinating concept, and there’s a pretty strong case for it with regards to some other North American species such as Osage orange. However, despite claims like this Georgia article’s that “no living North American animal can swallow pawpaw seeds whole”, Missouri Pawpaws are clearly a coveted food source for many mammals. The Missouri Department of Conservation’s pawpaw page states that “the fruit is relished by numerous bird species and by squirrels, opossums, and raccoons” and we’ve observed and photographed mammalian scat containing pawpaw seeds. Pawpaws may well represent a holdout from a very different climatological and ecological time in Missouri, and as such are worth taking a closer look at.

That being said, even native species can become problematic when over-abundant, as many Missouri land managers’ constant battles against Eastern Red Cedar attest. For example, a 2010 study showed that dense pawpaw stands can reduce other tree seedlings’ establishment by 1.5 to 3 times. One factor that can drive pawpaws to become dominant in the understory is heavy deer pressure, as deer selectively avoid pawpaw leaves while eating most other plants. Many visitors to CANS notice the tame and numerous urban deer that are certainly influencing the area’s ecosystem. A 2014 study in Illinois concluded that under such deer pressure,

“…the development of a dense paw paw understory canopy will further decrease species diversity and reduce tree species recruitment. Based on the life history traits of paw paw, and high deer densities and selective browsing, this issue is of concern for current and future forest communities.”

Another factor encouraging dense stands of pawpaws is the lack of fire in many modern forests, as suggested by a 2018 study in southeastern Missouri on various methods of controlling dense stands of pawpaw. Overall, it’s likely that dense pawpaw stands reflect an ecosystem disturbed by the lack (fire) and/or overabundance (deer) of other factors that might have maintained a different balance.

Given the dense stands of pawpaws in certain parts of CANS, questions regarding its management were recently raised at a CAS board meeting. After discussion and subsequent research, a consensus was reached that certain stands should become a target for removal or thinning, particularly those threatening to interfere with trails or viewsheds (such as a large, otherwise open oak tree becoming surrounded by pawpaws). However, most stands of pawpaws are distributed throughout the woods at CANS and are considered a lesser concern for now compared to more pressing projects. These can also be seen as representing a reasonably natural part of the ecosystem that provides food and shelter for a wide variety of animals. In the long term, establishing a fire regime and/or controlling deer would have the most impact on pawpaw density, and in the meantime it’s quite possible that dense pawpaws are also shading out and preventing the establishment of far less desirable invasives like Bush Honeysuckle.

If you take a walk at CANS this fall, one easy place to find dense pawpaws is along the forest trail between benches B and D (see map here). Earlier this year, these trees held abundant fruit, thought they’ve likely been eaten by the time this is read (we ate fully ripe fruits from our property in mid-September). The complicated questions surrounding pawpaw growth and management are a good reminder that birding is never just about the birds. Looking at the ecosystems that support our favorite birds is a good way to deepen our appreciation and understanding of the complex systems supporting all life, including the inevitable role of human influence and management (after all, we’re the ones who suppressed fire and encouraged deer!).

-Note: Thanks to Bill Mees for first raising this question and to John Besser for additional research.