Note from the President 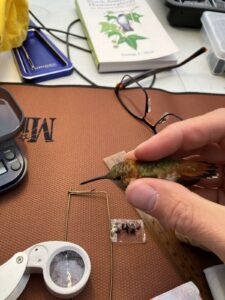 Veronica Mecko and Josh Potter banded the rufous hummingbird last month and reports it was very healthy with lots of fat stores for the journey south.

Columbia had a rare visitor in November. Amanda Jackson lives in south Columbia and emailed me on November 4th with a picture attached of a hummingbird she thought could be an Allen’s. I sent the picture to people that know more that I – a Rufous Hummingbird would be the most likely species this time of year but still a rare visitor. According to Enjoying Missouri’s Birds, a publication produced and maintained by MDC, the Rufous Hummingbird has been a visitor to Missouri from August into December. If you have an older version of this publication (as I do from 2011) you’ll see that they used to visit from mid-September to mid-November. It couldn’t be said for certain what species of hummer was diligently visiting the Jackson’s feeders until November 15th when Veronica Mecko and Josh Potter captured and banded the little hummer. Veronica posted the findings on MOBIRDS, a listserv maintained by Missouri Birding Society (MBS).
She wrote, “This afternoon we were able to capture and band a hummingbird in Columbia: a juvenile (hatch year) male, Rufous Hummingbird. The hummer was healthy and feisty with a weight of 4.11 g and had a good amount of fat. The wing measurement of 42.8 mm, the deeply notched second tail feather (R2), and the width of the outermost tail feather (R5) confirmed it as Rufous, rather than Allen’s. A bander with the Hummingbird Study Group in the southeast confirmed the ID by photos and measurements.”
Veronica went on to say, “It will be interesting to observe how long the hummingbird will remain at the present location. Amanda and Chris are diligent hosts, keeping the feeders changed daily and their yard is good habitat too.”
Amanda didn’t have to know much about the range of this little hummer to know that she had a very special visitor. She and her husband, Chris, wanted to share their little visitor with all that wanted to marvel in its splendor and beauty. For me it was a lifer. I stopped by on November 13th and was able to get a glimpse of him at the back feeder. Amanda said, “I feel very blessed to be part of this little guy’s journey. I have loved hummingbirds since childhood, when my grandmother taught me about them. I have hummingbird feeders every year but this is my first time having them up this late and boy did it pay off!! With my grandmother’s passing last October, I have put out several large bird feeders and have enjoyed all that have come to my yard. I am just a beginner birder and look forward to learning from others!”
I should add that the hummer that got banded was the second Rufous Hummingbird to visit her feeders in November. The pictures she sent me November 4th was likely a female Rufous but we can’t be for certain. The male that was banded showed up on November 11th and the female left a day after.
As of November 27th, the Jacksons haven’t seen him for few days. They are sad to see the little hummer go but know it’s best and they will have the feeders ready for him this time next year.