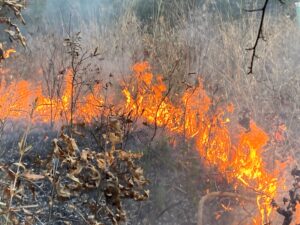 The prescribed fire was a great success at Wild Haven

On December 2, a crew of 15 volunteers conducted a 20-acre prescribed burn in the creek valley west of the Wild Haven picnic area. Volunteers came from CAS, Boy Scout troop 242, and from ‘SAFE’, the MU student forestry club. Because many of our crew had limited experience, burn boss Roxie Campbell spent a considerable amount of time explaining the burn plan and use of fire management tools.

Conditions were very favorable (warm, dry, light wind) for a steady, safe burn of the ground layer, and nearly 100% of the unit was burned over a 2-hr period. Because we had a large crew and the fire was well behaved, the only problems faced by the volunteers were boredom and occasional smoke . After the ground fire burned out, there were a few burning dead snags, standing or fallen, that were either extinguished with water from a backpack sprayer or left to burn themselves out over the next several days.  We look forward to seeing the response of the wildflowers next spring! 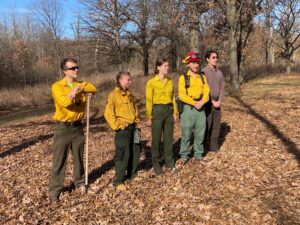 CARES Volunteers from the Mizzou Fire joined CAS for the fire.

In the weeks before Christmas, David Neely and a couple helpers continued our effort to remove Autumn Olive at Wild Haven.  We expanded the previously cleared area behind the picnic shelter by removing some of the largest and densest olive stands. Much remains to be done but we appreciate David’s initiative, and we plan to keep this work moving forward by hiring a contractor again in 2022 to continue the work on areas near the picnic area and the West pond.

We continue to make progress in our project to restore native vegetation communities at the Columbia Audubon Nature Sanctuary off Bray Rd in west Columbia. A six-acre area on the west side of Scotts Branch Creek has been treated with herbicide over the past two growing seasons, and we are ready to start adding native shrubs, grasses and wildflowers.

This fall, Bill Mees planted 32 shrub seedlings purchased from Missouri Wildflowers Nursery, as well as some sassafras plants donated by frequent volunteer Charlie Alexander. Shrubs were mostly planted in the riparian zone along the creek. We have ordered several different seed mixes for the different habitats in the restoration area, including moist prairie mix for the low-lying area near the footbridge, deep soil mix for prairie on the open slopes, and savannah mix for open areas interspersed with large trees. We expect to receive the seed mixes in early January, and to plant the seed using a combination of a mechanical seeder in open areas and by hand-spreading of seed in areas with too many trees. Look for announcements on the CAS website if you’d like to help spread the seed.