This fall’s unseasonably warm weather continued on December 18, the day of the Columbia Christmas Bird Count. Temperatures were mostly in the 40s, above normal for the date, although the risk wind made it feel a bit colder and may have kept some birds in heavy cover. The turnout of count volunteers was high as usual, with over 100 eBird checklists submitted for the day. Unfortunately, counters did not have as many birds to count as usual. We saw a total of 87 species and over 65,000 individuals in our count circle. Individual groups had species totals from 32 species (Area 8, north of I-70) to 64 (Eagle Bluffs). This is about 10 fewer species than we see in an average year. Total counts for each count area are summarized in Table 1

The most common species reported in the count was Mallard with over 23,000 individuals seen, mostly at Eagle Bluffs. However, waterfowl as a group showed the biggest drop off compared to typical counts, with only 12 species seen and about 10 expected species (mostly diving ducks) not reported. Notable water birds included one American Black Duck (Eagle Bluffs), one Least Sandpiper (More’s Lake in north Columbia), and 2 Virginia Rails (Columbia wetland unit 2).

Abundant land birds included Red-winged Blackbird, with over 13,000 individuals (not including >5000 ‘blackbird sp’) and American Robin and European Starling, which each had counts over 3000. Black Vulture, a recent colonist in the Columbia area, was seen at two different locations — possibly the same 3 birds. Land birds found at low numbers and single locations included Eastern Screech-owl, Merlin, Red-breasted Nuthatch, Pine Siskin and Lincoln’s Sparrow

For the second straight year, we did not have a chili dinner after the count to tally our sightings in person. Instead, participants submitted their checklists into eBird, making compilation of our results relatively quick and easy. Thanks to everyone who participated! 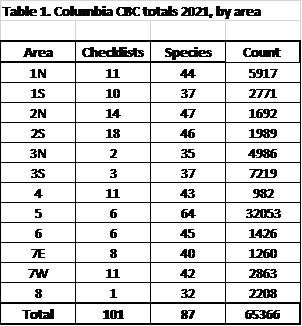 See the results of the annual Christmas Bird Count!