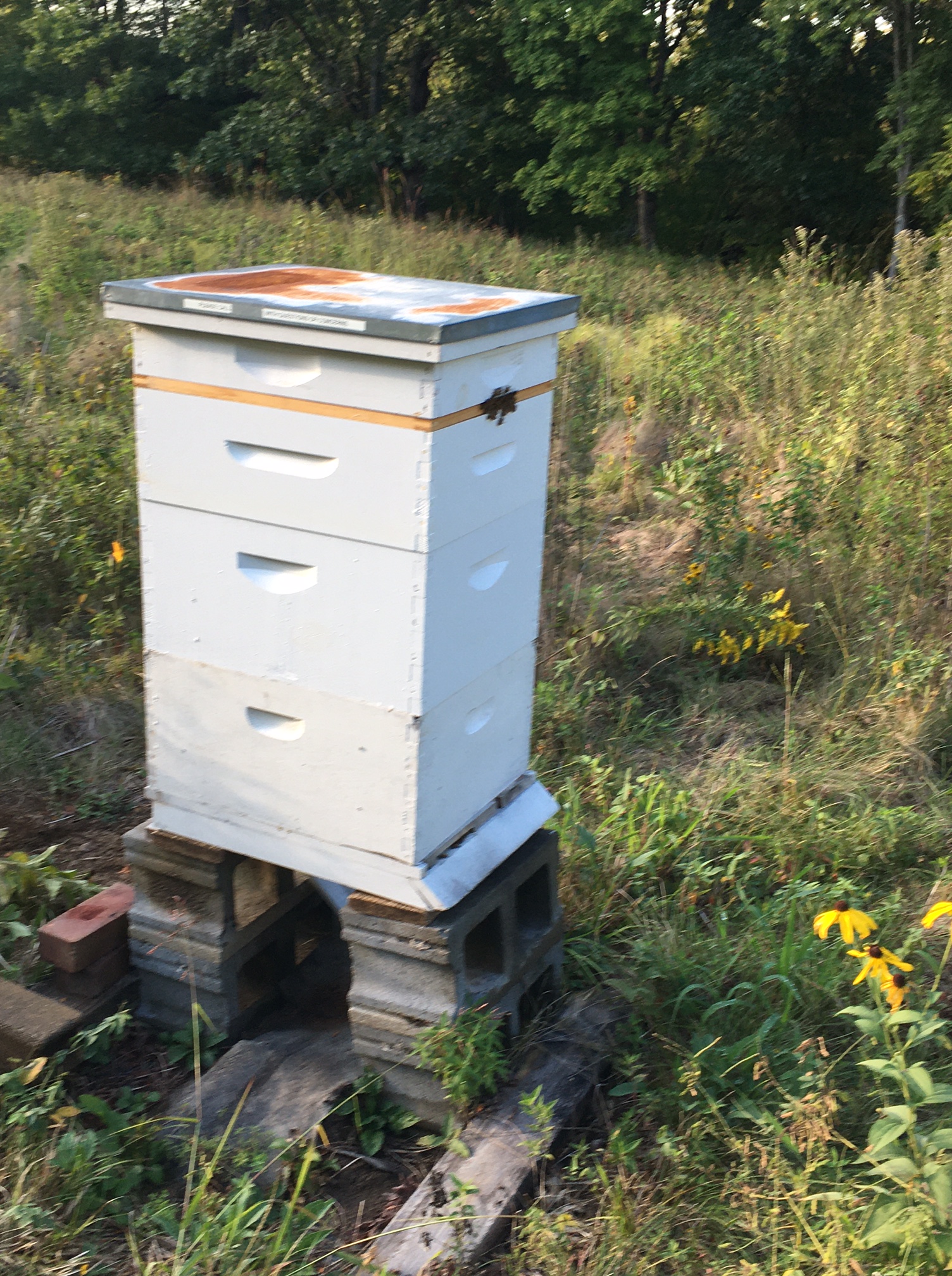 After several years absence, honeybees have been reintroduced to the prairie section of the Columbia Audubon Nature Sanctuary. This is not to say that wild honeybees have not been living in the forested area of the Audubon sanctuary or that honeybees from the hive at Fairview Elementary School have not been foraging in the prairie, but as one of the goals of the prairie restoration project was to provide an environment for all sorts of pollinators, it seems fitting to reintroduce a honeybee hive since it was absent from the environment.

Honeybees are unique in the insect world for their method  of reproduction. First, if you look at the hive as individual insects there is reproduction as the queen lays eggs and the individual bees hatch and mature to become members of the hive. This only contributes to the survival of the individual hive but does not contribute to the survival of the species. For survival of the honeybee species, it is necessary to have reproduction of the hive.  When you talk about the reproduction of the hive, the entire hive must be looked at as an individual entity. The hive reproduces when it goes through the natural process called swarming.  This is when the original hive splits and the existing queen and roughly half the bees leave the hive to search for a new home. The honeybees that are left behind then raise a new queen and continue on as if the swarm had never happened.  If the swarm is successful in finding and setting up a new home then the population of hives doubles.  The problem with hive reproduction is that the success rate for new swarms to find a suitable home and survive for the first year is less than 20%. When you couple this with the about 80% survival rate for the bees left behind in the original hive which have to raise a new queen in order to survive, you find that it is difficult for the honeybee hive population to expand. Some studies have shown that natural hive growth rate is less than 10% per year on average.

The colony that has been introduced to the sanctuary is a captured swarm that originated from a hive managed by a fellow Audubon member Lottie Bushmann. With the capture and placement of the swarm in the hive boxes we are hoping that we can increase the hive’s odds of survival up to 100%. The swarm was captured on May 12 and placed into its current hive boxes on May 13. This step satisfied the bees’ need for a new home. The bees then needed the three basic resources of water, nectar and pollen to build honeycomb and raise new bees to expand the hive. 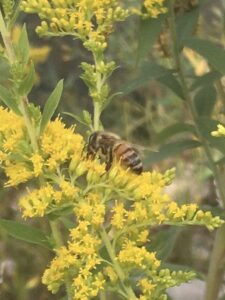 Utilizing the resources available in the restored prairie and surrounding area the hive has grown and flourished over the summer. The bees are currently finishing the summer by topping up their honey and pollen stores and the queen should be laying the eggs for the transition to winter bees.  Winter is a very difficult time for the bees as it is typically too cold for the bees to fly and when they do there is no pollen or nectar for them to collect for food.  The main job of the winter bees will be to protect and keep the queen warm so that she does not starve or freeze.   After the first of the year as the weather begins to warm the queen will begin laying eggs and the winter bees will transition to summer bees.  Come next May if the bees are flying from the hive boxes we will know we have been successful with the endeavor to help them survive.

While I do not encourage a lot of viewing and activity around the hive (the bees prefer to be left alone) there will probably be some people who will want to go view the hive.  If you choose to view the hive let me give you the following tips.

> The bees will sting you if you mess with them.  They prefer not to sting as that is a death sentence for them but they will not hesitate if they feel threatened.

> When viewing the hive it is best to stand quietly to the side of the hive to watch them.  In that position they do not typically pay attention to you.  Do not stand in front of the hive entrance.  You will be in their flight path to and from the entrance and they will view you as a threat to the hive.

> If you are near the hive and you feel bees flying and bumping into you that is their warning before stinging.  Move away from the area immediately.

> When walking around the hive walk behind the hive and not in front.

Do not try to open the hive. 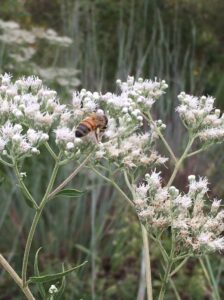 Foraging for pollen on Boneset flowers

Foraging for pollen on Boneset flowers