The Columbia Motus station has its first Motus tag detection – and it has a great story! 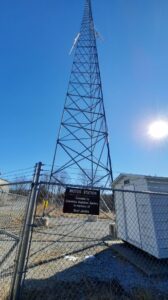 In late 2021, a Motus station was purchased by CAS in honor of Brad Jacobs and placed in partnership with the Missouri Department of Conservation (MDC) at the Waters-Moss Memorial Wildlife Area (Figure 1). The Motus Wildlife Tracking System is an international collaborative research network that uses coordinated automated radio telemetry to track Motus-tagged migratory animals for research and education. Motus is a program of Birds Canada in partnership with hundreds of collaborating researchers and organizations.

Missouri’s Motus network began with its first station placed in Jefferson City in 2018 and has since grown to a network of 20 stations. Eighteen of these stations have been placed and are managed by MDC with two partner stations managed by the St. Louis Zoo and the Audubon Center at Riverlands. Missouri’s stations are placed in two strategic east-west latitudinal arrays, one in the northern plains portion of the state roughly along Highway 36 and the second in the Ozark Highlands roughly along Highway 60 (Figure 2). The beauty of Motus is its use of incredibly lightweight tags that can be placed on our smallest, long-distance migrants, which have only now become available at an affordable price. Tracking migration using Motus helps us to learn more about migratory pathways, timing, and stop-over sites to focus habitat management and protection at important locations for a wide array of migratory species, many of which are declining or threatened. The Columbia Motus station was deployed on December 30, 2021 in honor of Brad Jacobs and a news story about the effort was published by the Columbia Missourian. 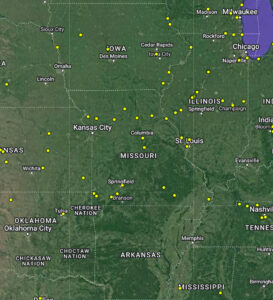 In my previous role as state ornithologist with MDC, one of the grants that I led to increase Motus stations in the state and Midwest region was a U.S. Fish and Wildlife Service Competitive State Wildlife Grant with 9 other partners – state agencies and organizations like SELVA, a non-profit in Colombia dedicated to bird conservation efforts and learning more about migration. This grant is placing 60 new Motus stations across 8 Midwestern states and Mexico, Costa Rica, and Colombia and supports three Motus-tagging research projects.

One of these research projects funded by this grant was a partnership with MDC and SELVA to deploy 50 tags – 25 Motus tags on Golden-winged Warbler and 25 on Wood Thrush on the wintering grounds pre-migration. To execute this grant objective, I traveled to Costa Rica in early March to deploy as many tags as we could in a week with SELVA’s Nick Bayly, Costa Rican partner Paz Irola and Ernesto Carman, and two bird experts I took along with me from Missouri – Dana Ripper of Missouri River Bird Observatory and Kristen Heath-Acre of the University of Missouri. On the trip, we tagged five Wood Thrush and four Golden-winged Warblers at various sites. 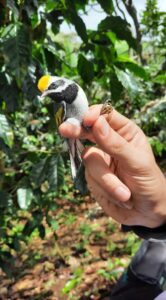 This male Golden-winged Warbler was tagged in Costa Rica by SELVA and MDC and later detected on two Missouri Motus stations, including Columbia on May 8. Motus tag on the bird in second photo. 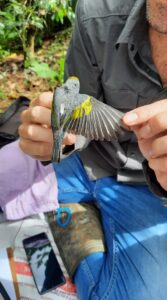 The first detection on the Columbia Motus station was a male Golden-winged Warbler that our group tagged on March 5 in Ernesto Carman’s bird-friendly coffee farm, Finca Cristina (Figure 3). This bird has been detected twice in Missouri – first on May 1 on the Hurley station in southwest Missouri and the May 8 detection at Columbia (Figure 4). Not only are these detections just mind-blowing, but they also give us data on a seven-day stop-over on spring migration for this bird. The bird stopped in Missouri, possibly in Ozark forest, to refuel and regain energy along its journey north. Our goal for tagging these birds pre-migration is that there are more Motus stations in the U.S. and Canada than down on the wintering grounds, so we were hoping to increase the probability of detections with this strategy as the birds moved north toward our receivers. Another goal of the southern Motus array was to capture potential movements of birds through our contiguous blocks of Ozark forest that we suspect are serving as stop-over habitat for forest birds – these detections (and others) on our Motus stations are helping us to validate these assumptions with data.

A second male Golden-winged Warbler that partners Paz Irola and Ernesto Carman tagged after our team left Costa Rica has been detected at another Motus station in Missouri at the MDC Southwest Regional Office in Springfield on April 29; that bird was tagged March 29 in Costa Rica. 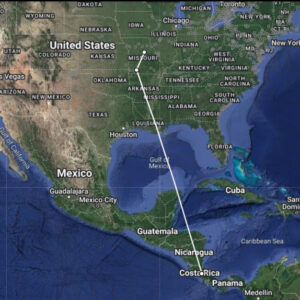 Pathway of Golden-winged Warbler detection on the Columbia Motus Station. Tagged on Mar. 5 in Costa Rica, detected on May 1 at Hurley station and May 8 at Columbia station.

This provides further evidence that the more Motus stations you have across the landscape to build a strategic network of receivers, the more we can learn about migration ecology and the more tags will be deployed with that strategic network together.

What are the odds that one of the four birds that we handled would pass through Missouri and be detected on not one but two stations? Incredibly slim. But it feels pretty darn special that the first detection on a Motus station placed in Brad Jacobs’ honor right here in Columbia would help us to learn more about bird migration and target conservation.

Happy birding all! What a migration it’s been. Fingers crossed for more detections. Birds are awesome!