Columbia Audubon Society and the City of Columbia partner to support the survival of the Eastern Bluebird (EABL) through the establishment and monitoring of the Columbia Audubon Nature Sanctuary (CANS) and Bonnie View (BV) nest box trails.  The BV nest box trail is easily accessed from Rollins Road near Fairview on the North and intersects with CANS which is easily accessed from the Scott’s Branch Trail or 3607 Bray Avenue. These trails are currently monitored, maintained and reported by Boones’ Lick Chapter Master Naturalists Kitty Peer, Leslie Palmer, Pam Lindsey and Pat Smith. For the six years prior, the trails were supervised by Columbia Audubon Society’s Nancy Bedan and Janet Lindstrom.

Nancy Bedan and Janet Lindstrom provided orientation for Master Naturalists in January and February 2021 to learn the location of nest boxes (14 total), assess need to relocate and/or change any nest boxes and transfer monitoring techniques. Area caretaker, Bill Mees, was introduced. February 13-19 brought the coast-to-coast snow storm coming through the Midwest: heavy snow, ice, high winds and record lows. The nest boxes were cleaned using scraper and brush in late February, a new nest box was built and attached by Kitty and Michael Peer at the CANS 4 location, and snippers and weed eater were used to clean underneath the nest boxes. Later, one nest box was relocated closer to the trail (PR2) and CANS1 was replaced with a nest box donated by Janet Lindstrom.  A Noel guard was attached to CANS5 and identification plates reattached. 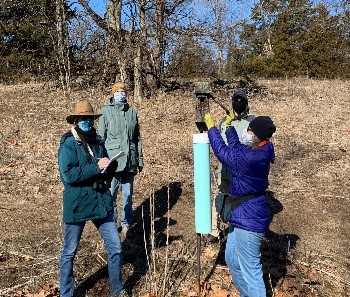 The nest boxes are monitored weekly from the beginning of March through the end of August each season, data are compiled and forwarded to the Missouri Bluebird Society.  In 2019, it was reported that EABL nesting attempts totaled 19; 15 nests were successful with 73 eggs producing 68 chicks that fledged; there was no evidence of predation.  Further, 1 Black-capped Chickadee (BCCH) nest successfully fledged 5 chicks; also, the House Sparrows fledged approximately 20 chicks.  The 2020 nesting season resulted in 12 successful EABL nesting attempts fledging 33; Black-capped Chickadee (BCCH) fledged 6 chicks, the invasive but native House wren (HOWR) fledged 24 and the non-native House sparrow (HOSP) fledged 5.

The Missouri Bluebird Society confirmed the scarcity of EABL’s across the State following the severe cold spell which gripped the country, well into the South, for nearly 2 weeks.  There were reports of Bluebird casualties where they were found dead in groups of up to 9 after being frozen overnight   Here at CANS and BV the 2021 nesting season produced 4 successful EABL nests with a total of 35 eggs; only 16 chicks fledged due to HOWR predation in 2 nests.  The BCCH’s successfully fledged 17 chicks and the HOWR’s produced approximately the same number of chicks.  During the 2022 season, EABL’s fledged a total of 27 chicks from 31 total eggs, 13 of those eggs were white. There was HOWR nest box predation in two nests. The Chickadees fledged 13 and the HOWR’s fledged approximately 23.

Happiness is (among other things) communing with nature—setting cross-legged on a gigantic rock in the sunshine, listening to the aspen quaking, watching the top of the water in a glacial lake as well as monitoring nest boxes. Monitoring Bluebird nesting boxes is walking for exercise, relaxing and reduces stress naturally. It is listening to the music of nature. Bluebirds and humans have always had a special relationship. For example, “The Last Word of a Bluebird” by Robert Frost, “Somewhere over the Rainbow,” “The Bluebird of Happiness,” etc.  The arrival of the male “Bluebird of Happiness” is one of the most predictable signs that Spring is only weeks away.