On 3 Sep. 2020, following the advice and directions from CAS member John Besser, I went to Wild Haven Nature Area to look for birds and butterflies. It was a very pleasant morning when I arrived at 9:30 and mostly quiet except for the calls of a few local permanent resident bird species. I was able to spot two spot mixed-species flocks of birds: One had a basic plumaged adult male Golden-winged Warbler (GWWA) and a Red-eyed Vireo. I was lucky enough to get a photo of the GWWA but not the vireo. Later I found another small flock with a basic plumaged female 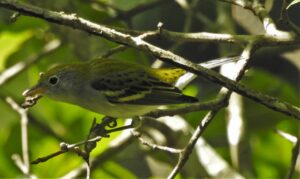 Chestnut-sided Warbler (CSWA) and a Yellow-bellied Flycatcher (YBFL). I was able to get a photo of the CSWA but not the flycatcher despite getting good enough looks to identify to species.  As typical for the species, YBFL are almost always observed high up in a shaded understory and just below the tree canopy so getting a good photo of one in the fall has been an exceptional challenge for me. Later, I found a juvenile Cedar Waxwing following two adults so I was confident that the species bred somewhere on the preserve.

Just as interesting to me were the butterflies. I did see very common species such as Eastern-tailed Blue, Red-spotted Purple, Common Buckeye, Spicebush Swallowtail, and Pear Crescent. The highlight for me, however, was observing and photographing (much less challenging than photographing birds!) two of my favorite butterflies: Northern Pearly-eye and Gemmed Satyr. The Pearly-eye is a gorgeous, common species observed late summer and early fall and almost always in dappled sunlight in shaded woods. Once they flush, they fly off in a rather jerky, skippy movement but soon settle down where it is usually east to get a photograph. They get their name from the spots on the underside of their wings that makes it look like 10-12 eyes are looking at you! Unlike many butterflies that obtain nectar from flowers, the favorite foods of the adults are oozing tree sap, rotting fruit, carrion, and dung.
The most interesting find was most definitely the Gemmed Satyr. This gorgeous, medium-sized butterfly occupies the same habitat as the Northern Pearly-eye but it is noticeably smaller and takes much shorter, fluid flights once flushed. This is a species that continues to expand its range north, possibly due to climate change. The species is now found in a line from St. Louis to Kansas City. In now occurs in the Columbia area and Wild Haven is the 3rd spot I have photographed the species in Boone County (the other two being Rockbridge State Park and a private residence SSE of Deer Park). This species gets its name from the ovoid, purplish gray and cream-colored patch that contains two small, metallic blue and silver spots- these little “gems” are iridescent in sunlight. Its food sources are identical to those of the Northern Pearly-eye. 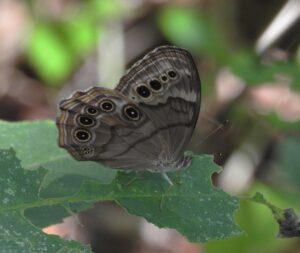 So when birding is slow, spend a little time glassing the butterflies that flutter past your position. It is a world that once you enter, it is hard to leave!