My name is Brady Lichtenberg and I am a wildlife biologist for MDC, and the area manager of Eagle Bluffs Conservation Area. I earned my BS in fisheries and wildlife sciences in 2016. I have been an employee of MDC since 2012, and have been at Eagle Bluffs since 2016. As many of you know, in the late spring of 2019 most of the Missouri River floodplain was impacted my extreme flooding. While river levels did not reach that of the 1993 flood, the duration of the flooding was unprecedented. We began taking on water over top of our river protection levees on May 23 and were not able to drive down the main gravel road again until July 7. The flood caused a fair amount of infrastructure damage across the area. We had to re-grade, fill and gravel many washed out roads, one levee along Perche Creek sloughed off into the creek that will require realignment of that whole section of levee, and one section of levee breeched which will also require extensive repairs. The flood also caused a major change in the native plant communities across the area. The parts of the area that are at a lower elevation that used to be host to mainly perennial emergent marsh plant species (cattails, bulrush, buttonbush, etc.) were replaced with annual plants. The areas that typically grow a diverse mix of annual grasses and broadleafs were replaced by a sea of grasses and sedges. In a nutshell, the flood gave us a “blank canvas” and the opportunity to manipulate areas in different ways to encourage the most diversity possible across the area. 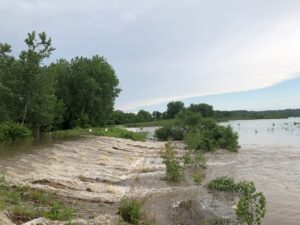 Because of the changes the flood caused, we noticed some interesting changes in the ways waterfowl were using certain parts of the area relative to the typical year. One major driver of this change was the complete lack of production agriculture across the area. On normal years, portions of the area are cash rented to permittee farmers who grow corn and soybeans for a living. While they do harvest most of the crops they grow, we work with them very closely and have them leave patches of crops standing in locations that we can later flood to provide additional food for wildlife. Corn in particular is a very attractive food source to migrating ducks and geese, so on years where we are able to grow and flood corn it almost acts as a giant magnet, pulling waterfowl in from all across the area. Because there was not flooded corn on Eagle Bluffs last year, birds were much more spread out across the area spending a lot of their time feeding on the much more nutritionally beneficial native moist soil plant seeds, tubers, and the insects those plants attract.

Once spring waterfowl migration came to an end we found ourselves in a cool, wet spring. Rains every few days and high river levels causing higher than average water levels across the area made for a nicely set stage for the upcoming shorebird migration. As the early spring wore on we did our best to monitor water levels very closely and allow them to very slowly recede, opening up many acres of mudflats for northbound shorebirds. The large amount of habitat and cooperative weather fronts made for a diverse and long-lasting spring shorebird migration.

As I’m sure many of you know, we have two bald eagle nests on Eagle Bluffs. While the southern-most nest successfully raised one eaglet (who has now fledged and seems to be doing well), the centrally located nest was unsuccessful this year. There has been a lot of speculation as to the cause of the nesting failure, but we do not have any concrete evidence of what actually caused it. In the future, our staff will post signs in hopes that it will keep visitors from causing disturbance around the nests and hope for the best.

One interesting series of projects that we do on Eagle Bluffs every year is trapping and banding Canada geese, mourning doves, and wood ducks. In the case of the Canada geese, we wait until they are molting their flight feathers in early Summer, then set up a large corral net style trap and coax them into it. For wood ducks we bait them onto dry land in the late summer then use a rocket propelled net to catch them. Doves are a little easier, as we use sunflower seed as bait and set a trap made of wire mesh with funnel shaped doors over top the pile of seed in mid-Summer. The doves walk into the trap following the trail of seed, then can’t get back out the door. In all instances, we gather age and sex data on each individual, crimp a loose-fitting aluminum band with a unique number sequence on their leg, and let them go. Each band also has information on how to report a recovered band. This data is used to estimate survival, reproduction rates, population sex ratios, dispersal distances, and to set harvest limits and season dates for hunting.

As of now, the upcoming fall and spring waterfowl migration looks promising. As a whole, the reproductive grounds in the north-central US and central Canada are wetter than average, meaning more quality habitat for brood rearing. Unfortunately, the U.S. Fish and Wildlife Service, along with most states had to cancel their survey flights this spring where most of the data for yearly population estimates is collected; it’s fairly safe to connect the dots between abundant quality habitat and increased reproductive success. Our habitat on Eagle Bluffs is in good shape with plenty of food that will be available to migrants when they arrive. These factors, coupled with Canada’s currently closed border to U.S. visitors will greatly decrease the number of waterfowl harvested in early Fall before they have a chance to make their way down to Missouri.

If you ever have questions, comments, or concerns about anything Eagle Bluffs-related, please feel free to call my office at 573-445-3882 or send me an email at Brady.Lichtenberg@mdc.mo.gov