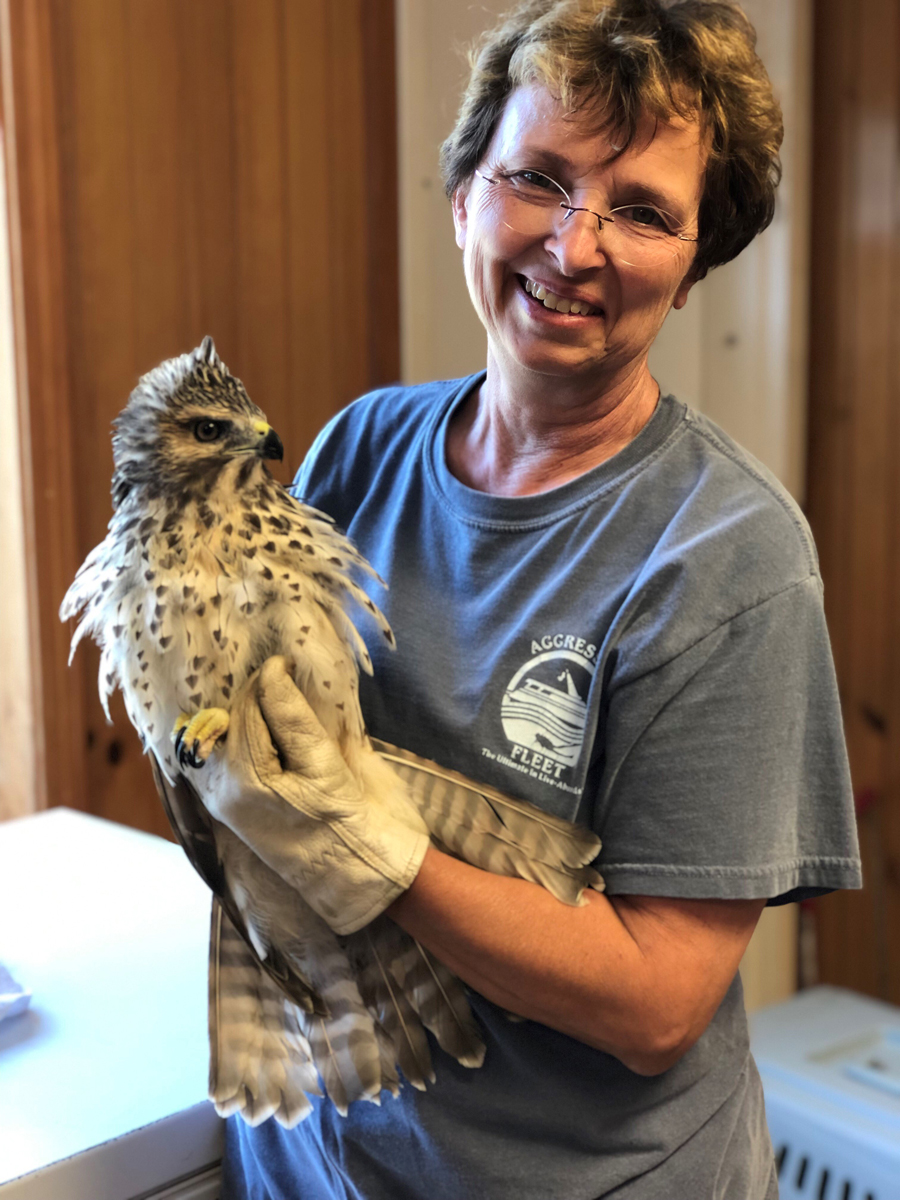 Judy Lincoln with a young Red-shouldered Hawk at Raptor Rehab.

Judy Lincoln is a volunteer for Raptor Rehab, as well as an active member of the Columbia Audubon Society. She kindly answered a variety of questions about many aspects of Raptor Rehab:

What is Raptor Rehab?

The University of Missouri’s Raptor Rehabilitation Project, better known as Raptor Rehab, treats injured raptors with the goal of rehabilitating them for release back into the wild. Some birds that are unable to be released due to the type of injury become educational ambassadors instead, visiting with school children as well as the general public at a variety of different events. Additionally, the project has become a teaching class for interested veterinarian students to learn triage, case management, and electronic charting while honing medical skills.

What species does Raptor Rehab handle?

As the name implies, Raptor Rehab mostly works with raptors, including hawks, owls, eagles, vultures, falcons, and kites (if the bird has a hooked beak, it probably is a raptor that we will care for). The available facilities are designed for raptors, but occasionally other species end up in our care, including nighthawks, herons, bitterns, geese, swans, and a pelican.

On average, how many injured raptors are treated per year, and what are the most common sources of injury?

Typically 90 to 120 birds come in per year. Injuries commonly result from collisions with cars, windows, or barbed wire. Some birds experience injuries as a result of fishing line, leg-hold traps, or exposure to lead pellets. Other issues include a general lack of food or injuries sustained while learning to fly.

Do you work with juveniles as well as adults? 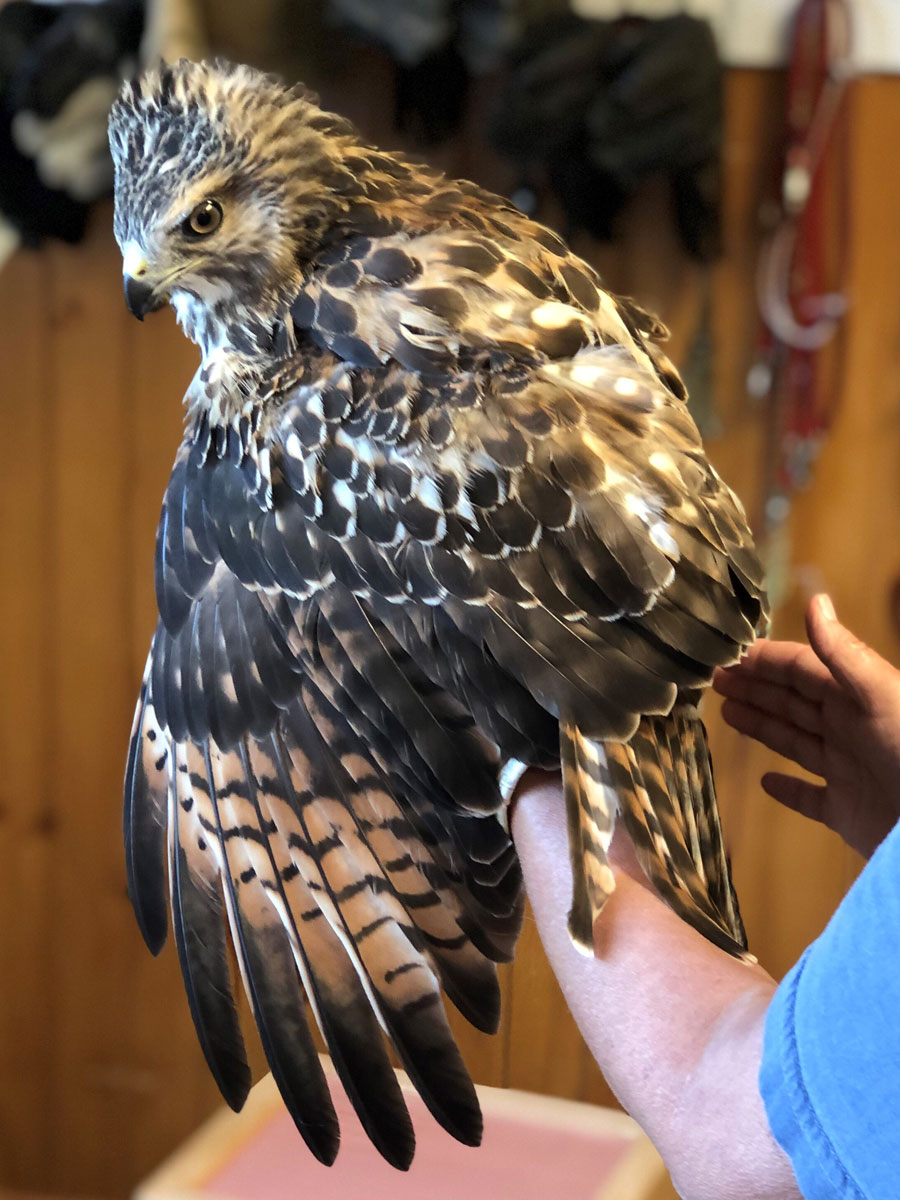 Yes, but folks sometimes bring in healthy juveniles by mistake. Young raptors are cared for by their parents during the period after they leave the nest but before they master flying. Known as “brancher” babies, these juveniles may be seen on branches or even the ground, appearing vulnerable. In many cases, all is well, though there are cases when the rescue of brancher birds may be warranted: for example, if the juvenile is legitimately injured, if parents are dead, or if there is an active threat from a domestic animal. Some situations are subjective, and consultation with someone at Raptor Rehab may be in order to determine whether to take action.

Are there seasonal patterns in types of injury or numbers of birds that are brought in?

Spring has the highest number of juveniles, for example with injuries sustained while learning to fly or being blown out of the nest. There is often a lull in the fall when breeding season is over and most juveniles have mastered flying and hunting. Winter probably brings in more birds hit by cars while hunting roadsides.

What are the most common species of raptors that come in for rehab?

Red-tailed Hawks and Barred Owls are the most common, followed by Great Horned Owls, Red-shouldered Hawks, American Kestrels, and Eastern Screech Owls. Not all years are alike; some years, for example, we get lots of Bald Eagles.

What are some unusual species that have been treated?

In the 15 years I’ve been here, these are some rarities I can remember: Mississippi Kite, Peregrine Falcon, Broad-winged Hawk, Short-eared Owl, Northern Saw-whet Owl, Barn Owl, and Northern Harrier. We’ve also had Snowy Owls, but they tend to be in bad shape when they arrive, and they usually don’t make it.

Do you have any particularly memorable success stories? 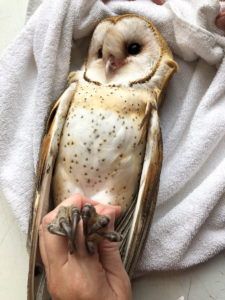 One season we had two broods of six young Barn Owls each, and we were able to release both sets. One brood came from a grain silo and the other from a church steeple. That took some fearless, agile ladder climbing!

Here’s a funny release story: On a hot afternoon, we drove a Great Horned Owl to its release site near a lake. It was restive and bumping around in the crate. When released, instead of heading for a nice, large, nearby oak, it flew out over the lake, lost altitude, and landed in the lake, floating like a duck. As we were searching for a dinghy, it was able to take off from the water without webbed feet, and it flew back to the luggage rack on the van. After resting and drying off, it flew into the target oak tree at last.

Right now we’re about to release an slightly electrocuted/concussed Red-tailed Hawk that seems to be progressing well. She experienced only a slight burn on the wing, but she fell about 30 feet onto concrete. She is currently bright, alert, and flying well.

Do wild birds respond to or interact with birds in captivity?

We’ve had tethered owls and hawks threatened by local hawks, one of the reasons we never leave them alone on tether. Once a male came to investigate a soliciting female Red-tailed Hawk who was tethered on the exercise line. Sometimes hummingbirds, bluebirds, and flycatchers check out tethered sunning hawks.

How do you assess whether a bird is fit to be released?

Raptor Rehab brought one of their educational birds, a Barred Owl, to the CAS 60th Anniversary celebration. The 2019-2020 Newsletter Editor and Field Trip Chair are shown admiring the bird. Photo by Kris Hagglund.

After medical treatment, we make sure they are eating on their own, then we exercise them by having them fly increasing laps in the flight cages. Flight quality is assessed based on ease and symmetry of flight, lack of excessive panting, and the ability to gain altitude from the ground. For most species, the ability to catch live prey three times is a prerequisite to release. The exception is for eagles and vultures, which have no need to catch live prey. About 28-30% of birds that are brought in are ultimately released to the wild. A small percentage of the rest go to zoos or sanctuaries, but the majority are humanely euthanized.

What is the release process like? Can visitors come and watch?

Sometimes we have public releases, but many are not public due to the many factors that have to come together: getting landowner permission, coordinating with MDC, fitting vet students’ schedule, waiting for suitable weather, and more. Releases sometimes happen on short notice, even surprising Raptor Rehab volunteers.

What should I do if I find an injured raptor?

First, assess whether it is truly injured. One year we had several calls about a hawk in the US 63 median close to Ashland; it was just very successful hunting animals who lived between the lanes. As noted above, sometimes people conclude that young birds out of the nest need help when in fact they are still under the care of the parents.

If you have found an injured raptor in need of assistance, call Raptor Rehab at the number listed on their website. They can sometimes send a volunteer out to handle and transport the bird.

If it is in imminent danger from pets or other predators, and if you are comfortable doing so, try to contain the bird with a jacket, net, or box and keep it in a dry, dark, quiet place until it can be transported to the Vet School. Take extreme care if doing so. As noted on the Raptor Rehab website, “Raptors have sharp talons and powerful beaks which they can use to protect themselves. Even young or injured birds can be a serious threat. For this reason, the Raptor Rehabilitation Project recommends that you contact us instead of trying to handle or care for a bird yourself.”

Providing clear directions and information to Raptor Rehab volunteers will help to facilitate rescue: Let them know the type of bird, type of injury, and most importantly, where it is and how to get there by offering details about landmarks, an address, and/or GPS coordinates.

Can I volunteer with Raptor Rehab?

Raptor Rehab depends on volunteers, who must be at least 18 years old per regulations. To be eligible to handle birds, volunteers take an initial four hours of food prep training, followed by an additional four sessions of training. Wearing rubber gloves, we cut up dead rodents, fish, and chicks so if you’re squeamish, this may not be your ideal job; some eventually get used to it. Some tasks, such as yard work and maintenance, do not require completion of training sessions. For full details, see the volunteer page of the Raptor Rehab website.

Who should I call if I find an injured songbird?