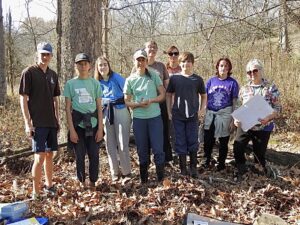 On Wednesday, November 9, Bill Mees and I met with Sarah Davis, leader of a stream team that is interested in monitoring water quality of Scotts Branch Creek. We walked the creek from our footbridge downstream to the city boardwalk. There wasn’t much stream to find, only a series of pools with no surface flow until we approached the Audubon property boundary. There we saw some fish and a large snapping turtle, and we noticed that the pools were connected by a trickle of water.
Back upstream, sampling the stagnant pools, team members did some preliminary sampling of water quality parameters such as dissolved oxygen, and they looked for aquatic invertebrates. They found almost no dissolved oxygen in the water and only a few, pollution-tolerant invertebrates. 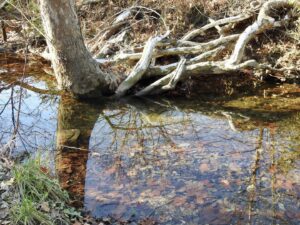 The team plans plan to start normal spring and fall sampling on Scott’s Branch in 2023. Hopefully winter rains will bring the stream flow back toward normal and allow the water quality and aquatic life to recover from this year’s drought. I’m hoping Sarah and her team will expand their sampling to monitor water quality in Hinkson Creek at Wild Haven nature area as well 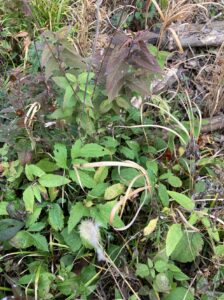 After spending some time with the stream team, I was drawn to the prairie restoration project on the west side of the creek. This area of about 6 acres was seeded last January and developed an impressive crop of annual weeds during this past growing season. The weed canopy iss dense in sunny areas and sparser in shaded areas. But everywhere I looked there were a variety of prairie seedlings. Almost all the species we seeded are perennials that take more than one year to mature. But some species such as Monarda and Black-eyed Susan have put on enough growth this year that they may bloom next year. So plan to take a hike across Scott’s Branch next year and enjoy the show!

Wild Haven Moss Trail
CAS member Louise Flenner has developed an interest in mosses, and she has volunteered to create a self-guided ‘moss trail’ in the woodlands of Wild Haven. On a recent visit to scout locations for this trail, Louise and her fellow ‘mossers’ found 20 species of moss! The trail route under consideration follows portions of the white and yellow trails. “The plan is to describe the route in a brochure available at Wild Haven or online. Look for an announcement when the trail is officially opened. 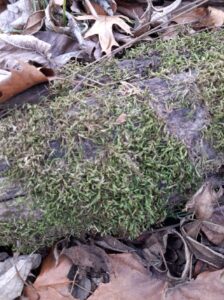