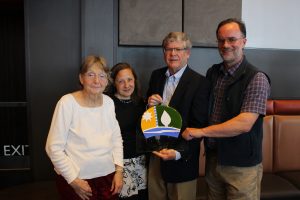 At a ceremony on April 25, the City of Columbia recognized the Columbia Audubon Society (CAS) for its work in habitat restoration at the Columbia Audubon Nature Sanctuary (CANS) and for its community outreach and education programs. Eight organizations and businesses received the 2018 Mayor’s Climate Protection Agreement Award, an honor created in 2014 to recognize businesses and organizations that excel in sustainable practices and promote a culture of environmental responsibility. Both CAS and the Columbia Public Schools Science Department received awards in the Environmental Stewardship category. The CAS citation (view a short video here) read:

“For their countless efforts to restore and protect the environment through community outreach and educational opportunities, the Columbia Audubon Society has earned a 2018 Environmental Stewardship Award. By providing a beautiful landscape for visitors and increasing native habitat for a variety of pollinators, they have made a lasting impact on our community.”

You can view a short video about CAS’s nominatino an

The main text of the original nomination read as follows:

Nomination of the Columbia Audubon Society

The Columbia Audubon Society (CAS) is a not-for-profit, volunteer organization with no paid staff. The mission of the organization is to “preserve the natural world and its ecosystems, focusing on birds, other wildlife, and the earth’s biological diversity through education, environmental study, and habitat restoration and protection.” This mission guides CAS in its choice of activities, projects, and sponsorships, all of which qualify it as a candidate for the Mayor’s Climate Protection Agreement Award for Environmental Stewardship.

CAS has demonstrated environmental stewardship by “building” a new prairie in urban Columbia. During the past four and a half years, CAS has worked to establish a diverse native plant community on what was once a fescue-dominated cattle pasture. CAS was awarded an $11,300 grant from the Missouri Bird Conservation Initiative for this project. The Columbia Parks and Recreation Department became a partner in the project and provided important mowing services. In January 2016, the prepared area was seeded with 84 species of native Missouri grasses, wildflowers, and forbs. This past summer was the second growing season for this new prairie. The prairie comprises 15 acres, six of which are located within the Columbia Audubon Nature Sanctuary (CANS) at 3607 Bray Avenue and the remainder are within the adjacent city-owned Bonnie View Nature Sanctuary.

CAS members and friends, along with members of partner organizations including the Native Plant Society, Wild Ones, and Master Naturalists, volunteered more than 669 work hours to bring this prairie into existence. Visitors, too numerous to count, have voluntarily expressed their excitement about the prairie and return repeatedly to experience its changing flora and bird life. The prairie has become a destination for many hikers along the adjoining Scott’s Branch Trail and has served as a demonstration project for several visitors, who expressed their desire to replicate the CANS/Bonnie View prairie on their own property.

The CANS/Bonnie View prairie provides multiple benefits to Columbia’s citizens and the environment. The prairie is beautiful, displaying a kaleidoscope of color as each variety of wildflower blooms, recedes and is succeeded by another color and species. This prairie also is a gateway into the remaining 22 acres of woods and other ecosystems that comprise CANS. The natural-surface trails here are truly a sanctuary from the bustling surroundings of houses, pavement, and automobile traffic.

Blooming wildflowers and grasses on the CANS/Bonnie View prairie attract a wide variety of pollinators. One noteworthy species is the beleaguered Monarch butterfly, for which several kinds of native milkweed were seeded in the prairie. Another is the struggling honeybee, which isn’t native but which is very important to agriculture. CAS has installed a beehive in the prairie to attract the attention of visitors and stimulate conversations about pollinators and their importance to humankind.

In addition to pollinating insects, native plants and their seeds attract other wildlife to the area, especially birds. The prairie, in only its second growing season, is hosting an influx of American Goldfinches, Dark-eyed Juncos, Chipping Sparrows, White-throated Sparrows, Northern Cardinals and others. None of these birds were attracted to the former fescue pasture, which provided little to sustain any foraging species other than cattle.

A prairie offers other benefits to the environment that are less obvious but equally important. For example, the foliage of a prairie and its deep and intricate root structure absorbs storm water and impedes runoff. This helps mitigate storm surges, flash flooding, and erosion. The prairie also helps filter out contaminants, recharge deeper soil, and refill aquifers. The entire 28-acre CANS property is accessible via natural-surface (water-permeable) foot trails.

Another often-overlooked way prairies benefit the environment is their role as a carbon sink. A worldwide increase in excess CO2 emissions is considered to be the chief culprit in climate change. Prairie foliage removes carbon from the atmosphere through the biochemical process of photosynthesis. This process traps the carbon deep in the prairie’s extensive root system. Science has determined that prairies are a better source of carbon sequestration than trees. Whereas, most of a tree’s carbon is stored above ground and is released when the tree dies, prairies store carbon in roots that stretch as deep as 10 feet or more. By permanently trapping carbon, the prairie established by CAS augments Columbia’s response to climate change.

Finally, prairies offer additional ecosystem services that benefit both people and their environment: they generate breathable oxygen through the process of photosynthesis and absorb a variety of airborne pollutants.

Although establishing a prairie in Columbia is an important example of environmental stewardship, CAS does more to qualify for the Mayor’s recognition.

Columbia Audubon Nature Sanctuary’s 28 acres are open to the public. The area has met the qualifications of the National Wildlife Federation to be designated a “Certified Wildlife Habitat.” CANS is also a destination on the Great Missouri Birding Trail. A three-year concerted effort by CAS volunteers has resulted in removal of 99 percent of the invasive bush honeysuckle formerly present on the property. These restoration efforts are intended to promote the area’s use as an outdoor classroom for students as well as a place of rest, renewal, exercise, and nature study for community residents. CAS uses the 56 square feet of display space on a trailhead kiosk to post educational articles, photos, announcements, and nature-related news from community and state agencies, all of which encourage the environmental stewardship of visitors.

CAS is also one of the charter participants in the city’s Adopt-a-Trail project. This program was initiated by the Parks and Recreation Department to remove invasive species, primarily bush honeysuckle, that grow along the city’s network of trails. CAS members and friends volunteered 52 hours and eliminated the honeysuckle and trash along a quarter-mile segment of the Scott’s Branch Trail, which borders CANS and Bonnie View Nature Sanctuary. In April 2018, CAS volunteers will plant 200 native Missouri seedlings, ordered from the Missouri Department of Conservation’s George O. White Nursery, to replace the honeysuckle. Honeysuckle removal on Bonnie View’s 90 acres is an ongoing effort.

The Columbia Audubon Society recognizes that education is a critical component of its mission and absolutely necessary if its activities are to have a lasting impact.  For this reason, CAS became a Partner in Education with the Science Department of Columbia Public Schools (CPS.) In the spring of 2017, CAS was recognized for its five years of active participation in this CPS program. CAS organizes and funds the “Band with Nature” second-grade field trip to CANS. This curriculum-based field trip, now in its sixth year, hosted 1,100 second-grade students from 18 of the district’s elementary schools in October 2017. More than 5,000 young students have participated in the event since its inception.

CAS has partnered with the Missouri Department of Natural Resources, State Parks Division, to perform bird species monitoring on two separate habitat restoration projects at Lake of the Ozarks State Park and at Ha Ha Tonka State Park. CAS is currently working with the Green Belt Land Trust of Mid-Missouri to monitor bird species on two other restoration project sites, one in Columbia (Hinkson Valley Preserve) and the other near Pierpont (Big Sky Preserve) in southern Boone County. These partnerships document the ways in which protecting and improving habitat benefits bird populations, providing another example of environmental stewardship.

CAS volunteers donate many hours to monitor and care for 12 bluebird nest boxes on CANS and the city-owned Bonnie View Nature Sanctuary. The Eastern Bluebird, Missouri’s state bird, has experienced population decline in the past. Extensive nest box programs nationwide have helped to reverse that decline. Monitoring and cleaning the boxes helps prevent predation by non-native species and encourages bluebirds to build additional nests before the summer’s end. This year, CAS provided 90 hours of labor for the love of Missouri’s state bird.

CAS organizes educational programs and bird-watching field trips that are open to the public. The goal of these activities is to foster environmental stewardship by helping the public to see, enjoy, and appreciate the benefits of protecting nature.

In partnership with the Columbia Public Library, CAS offers “Birdwise” programs for children 8 to 15 years old and their parents. The series of three programs, first offered in the fall of 2017, helps participants learn to identify common Missouri birds by developing their observation skills and using field guides. The Birdwise programs will be repeated in the spring of 2018, and a similar series for adults is in the planning stages.

CAS volunteers also have given “bird talks” to nursing home residents, garden clubs, and other groups. These presentations promote an appreciation of birds and nature, which encourages their protection and improves the lives of local citizens.

All of the activities, projects, and sponsorships that the Columbia Audubon Society engages in are designed to restore and protect our environment and to provide educational opportunities that create connections to the world around us. CAS believes that its efforts will ultimately inspire in others a deeper appreciation of the complex and interrelated systems that all species, including humans, depend on for their survival.

This is environmental stewardship in action.