The Covid-19 pandemic has affected just about everything Columbia Audubon Society  has done over  the past year, but we have fought to maintain some of our traditions, including the Boone County-wide bird count held on the traditional ‘Big Day’, the second Saturday in May.

Our ability to conduct this count during the pandemic has a lot to do with the availability of eBird, which allows numerous teams of socially-distanced birders to share their checklists with the chapter’s eBird database, ‘casbirddata’. Once the data is in this account, it is pretty simple to download all the data for the count day and tally up the species and total numbers of birds seen countywide or in each count areas. Now that the count data is compiled, CAS has our own archived digital version of the data, and all the data is still available to Ebird users,. 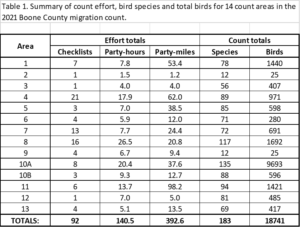 Table 1. Summarizes the results of the 2021 count. We received 92 checklists from 14 count areas, representing 141 party-hours in the field. Our species total was 183, with a total count of almost 19,000 birds.

The most impressive feature of the species list is undoubtedly the 30 Warbler species, which includes species that often seen in central Missouri, including Cape May Warbler, Connecticut Warbler, and Swainson’s warbler. Also impressive were the 13 species of shorebird and 11 species each of waterfowl, sparrows and flycatchers. On the other hand, it’s disappointing to see only a single Eastern Whip-poor-will reported from Boone County.

The number of species observed in each county area varied widely depending on quality of habitat in the level of count efforts. The two areas of the highest species count were 10A, which includes Eagle Bluffs (135 species), and area (117 species), which includes most of the heavily birded City of Columbia. I’ve attached a spreadsheet that lists the species seen in each of the count areas.  So check out the total for your area, and think about what species may have been missed and where to find them during the next Boone County migration count!

Thanks to all the volunteers who helped make this count happen