by Eric and Joanna Reuter 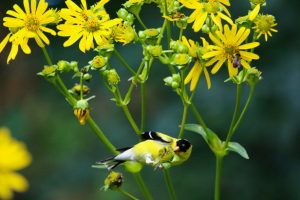 Goldfinches descended on our cup plants this year, and for good reason. A Missouri native plant, Silphium perfoliatum looks roughly like a sunflower but with a twist: its paired leaves wrap around the thick, square-ish stalk to form twin basins that collect and hold moisture from dew or rainfall (hence the species name). This distinct structure can provide a useful local water source for insects and birds in the often-dry landscape of a Missouri summer. The bright yellow flowers, easily 6 feet or more above the ground, produce abundant seeds that are a favorite food for multiple bird species. The Missouri Botanical Garden claims that cup plant self-seeds, but our Goldfinches might take exception to that; it also spreads by rhizome.

A colony of cup plants established itself just outside our kitchen this year, easily reaching above the raised deck beyond our kitchen table. Ruby-Throated Hummingbirds and an assortment of butterflies visited the flowers regularly in mid-summer, while American Goldfinches and Black-Capped Chickadees mobbed the seedheads in late summer and early fall. Due to the plants’ height, all the activity was clearly visible from our kitchen table, allowing us to closely observe feeding and other behaviors nearly every morning. The cup plants became a natural combination of bird-feeder and water source, drawing activity without needing maintenance, cleaning, or introduced foods. 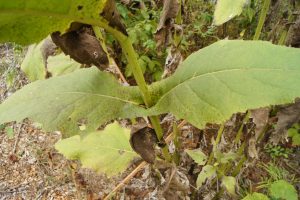 Goldfinches fought and feasted over the seeds, clinging precariously to the swaying upper stalks while violently excavating new morsels with a spray of debris that seemed more voluminous than the flower could possibly hold—each flower head seemed to be a clown car of seed. Chickadees hung upside down or clung sideways while keeping a watchful eye for the more aggressive Goldfinches. We wondered about the thoroughness of the birds’ consumption; how many viable seeds were ejected onto the landscape, to be scavenged by other creatures or to germinate next year, for every one actually eaten in place? We should have placed an old sheet on the ground to catch the debris, then sorted and tallied the contents for comparison with the plants’ original capacity. Maybe next year

In early fall, we observed a series of Goldfinches performing what, in spring, we would have assumed to be mating behavior. They perched on a leaf or stem and vibrated their bodily wildly, holding their wings half-extended, while producing a series of unusual twittery vocalizations (full of character). We don’t know what this behavior was, but we might never have observed it at all without the cup plants bringing birds within plain, everyday view. 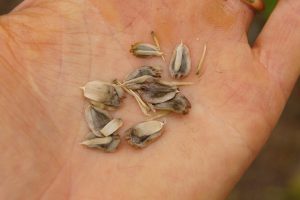 Cup plant, though a Missouri native, can easily be considered a weed. It’s tall, ungainly, and a bit rough around the edges, less dignified than a true sunflower and more likely to take over an area that you intended to use for something else. In urban or suburban settings, this is the type of native that may well bring out the weed police. Even with our looser rural definition of garden/yard tidiness, we discussed whether we should discourage the kitchen cup-plant patch: Would our cosmopolitan eclipse-watching visitors think it too unkempt? How long would it take to over-run our herb beds?  But we ended up leaving it to see what happened, and the resulting months of interesting bird and insect watching more than repaid our tolerance and trust. 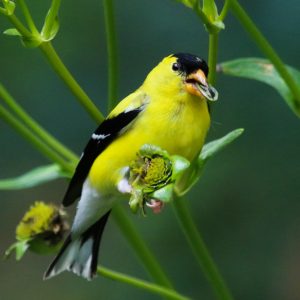 Aldo Leopold wrote about a different Silphium in A Sand County Almanac, asking “how could a week be a book?” He felt that a diversity of plants and animals in one’s environment is a form of history, allowing us to read and learn stories if we let them be told. In his view, a pristinely mowed lawn was a book-burning, and an overgrown right-of-way an encyclopedia. “It is apparent,” he argued, “that the backward farmer’s eye is nearly twice as well fed as the eye of the university student or businessman.” There is an inherent mental stimulation in diversity, which in modern times we must often work to create because our past actions have inherently and permanently altered the natural world. When CAS restores a mowed fescue pasture to a cacophony of wildflowers, or a homeowner allows a stand of cup plants to share an herb garden, we allow new stories to unfold through the insects, birds, and plants that we can observe and remember. The Goldfinches in our cup plants may spark no new research, but they made us healthier and more knowledgeable all the same. – by Eric & Joanna Reuter