News and Notes for February 2020

We will have a special general membership meeting at the Unitarian Universalist Church on February 19 at 6 PM, one hour before the scheduled presentation by Bill Palmer. The purpose of this meeting is to discuss and vote on a proposal for CAS to support the development of the Boone County Nature School. 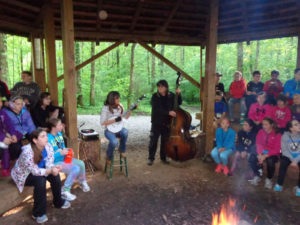 This proposal requests that CAS donate $30,000 to the Nature School, which would be earmarked for construction of a structure called the ‘Council House’. This structure will seat over 100 students (the planned capacity of the school) for events such as assemblies or performances.

Funds for this donation would come from a large donation received by CAS from the estate of Joseph Koster. These funds have appreciated in value by about $38,000 since they were received in 2011. The donation would give CAS the right to name the building, and the proposal suggests the name, ‘Koster-Columbia Audubon Council House’.

This donation would allow CAS to express our gratitude for the Koster bequest, as well as contributing to the development of a unique facility centered around nature-based education. For more details see the full proposal (as a .pdf) and comments from CAS board members (below). 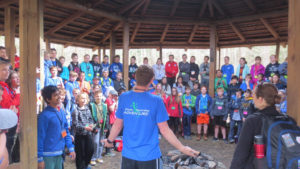 This meeting will meet the requirement of the CAS by-laws that decisions about large donations be made in consultation with the general membership. According to Article VI, Second 5:  “Substantial gifts to the Society, substantial expenditures, or the undertaking of major projects by the Society must be discussed with the general membership of the Society, either at a regular meeting or at a special meeting called for the specific purpose to consider such gifts, expenditures or projects, prior to final acceptance or approval by the Board of Directors.”  After a brief presentation and Q&A by Mike Szydlowski of Columbia Public Schools, we will open the meeting for questions and for statements for and against the proposal. We will end the meeting with an informational vote of the membership, the results of which will be considered by the Board of Directors before they take the official vote to approve or reject the proposal.

The project aligns with the CAS mission to “preserve the natural world and its ecosystems, focusing on birds and other wildlife, and the earth’s biological diversity through education, environmental study and habitat restoration and protection.” The Nature School curriculum will reflect Audubon priorities.

The donation makes sense for CAS as a “Partner in Education” with CPS’ Science Department since 2012. We support CPS by sponsoring the Band with Nature field trip for second graders and by providing dollars for teachers and students to attend nature and science education programs. The Nature School offers the chance to extend CAS support to other Boone County students.

The project has firm backing. The principal partners, MDC and CPS, have executed a Memorandum of Understanding, committed $3 million for the project, and are well on the way to raising an additional $1.2 million from private donors to construct the school. It will happen.

By collaborating, we achieve far more than we could alone. CAS knows the value of partnerships. CAS worked with the City of Columbia and numerous non-profit organizations to establish the prairie at the Columbia Audubon/Bonnie View Nature Sanctuaries.

The project requires only a one-time financial contribution—not an investment of CAS’ already stretched volunteer time and talent.

We have the opportunity to honor Joseph “Bo” Koster, who left a substantial estate gift to CAS in 2011. CAS can invest earnings from that gift without touching the principal of the gift or compromising CAS’ financial position.

The council house will be the only Nature School facility that can house all 100 students in attendance on a given day/week and serve as a place for discussion, learning, and decision-making as the namesake structures did for Native Americans.

Statement in opposition to funding the Council House structure

The CAS membership is not being asked to approve the Nature School overall, but the spending of $30,000 on one very specific aspect (the Council House structure). While the proposal is well-meaning, it does not pass certain tests for a spending choice of this magnitude.

In summary, this proposal is not the best use of one-time funds, has not been considered in the context of other possible options, and does not contribute to our mission at a level matching the requested investment.

The CAS First Day (January 1) hike at Rock Bridge Memorial SP (in cooperation with DNR) drew ~35 people on a sunny but rather windy winter afternoon. Highlights included many different woodpeckers and a large murmuration of European Starlings (eBird list).

The Great Backyard Bird Count happens Friday February 14 through Monday February 17. CAS will be holding its annual feeder crawl on Saturday February 15; see the field trip listing for details. Also, Eric Wood is planning to attend the St. Louis Audubon Society’s all-day trip to the Audubon Center at Riverlands and welcomes other interested attendees from the Columbia area; see here for details.

Other CAS field trips will be scheduled as weather permits and if leaders volunteer (as the Field Trip Chair is not available much of this month due to other commitments). Trips can occur on any day and at any time that a leader thinks is best. Leading a trip does NOT require any level of birding skill, just a willingness to be responsible for leading the walk and keeping track of the group. If you’d like to help make a trip happen, contact Field Trip Chair Eric Reuter.

Possible local destinations this time of year include Finger Lakes SP, Rocky Fork Lakes CA, Eagle Bluffs CA, Grindstone Nature Area, 3M Wetlands, and (of course) CANS. Large numbers of geese tend to migrate through the region in late winter, with numbers peaking in late February and early March. Eagle Bluffs re-opens fully on February 7 and can be a good place to observe geese. Though farther away, Thomas Hill Reservoir in Randolph County hosted over a million geese in early March last year (for example, check out this eBird list).

The field trip committee held a meeting in January to address field-trip insurance options. After contacting other Audubon groups, two companies are being considered, and research continues to determine pros and cons of the known options. We hope to move forward with a recommendation to the board soon.

The Columbia Audubon Society received $10,028 in donations during the 2019 CoMoGives online fundraiser for community nonprofit organizations. In addition, CAS earned a second-place “Challenge Grant”—an extra $500—for finishing with the second highest amount raised by an organization with a budget of $25,000 or less.

Columbia Audubon will use the funds to maintain and expand its education and conservation programs in 2020. The CAS board plans to continue converting pasture land on the west side of the Columbia Audubon Nature Sanctuary to prairie and to expand its scholarship program, which helps send students and teachers to science and nature-education camps and workshops. Other options for improving the CAS nature sanctuaries are under consideration.

This is the fifth year CAS has participated in CoMoGives. The amount received by Columbia Audubon in 2019 represents a 6 percent increase over donations received in 2018, which totaled $9,405. The number of people who contributed to CAS also increased to 97 in 2019, up from 81 in 2018. (Note: Three CAS 2019 donors contributed by check rather than online.) Twenty of the gifts Columbia Audubon received in 2019 were made in honor or memory of someone.

CoMoGives is conducted during the month of December by the Community Foundation of Central Missouri. Donations for the 138 local nonprofit organizations that participated in the 2019 CoMoGives drive totaled more $947,000. Columbia Audubon ranked 31st in terms of funds raised.

Columbia Audubon’s CoMoGives drive was coordinated by a committee of Doug Miller, Bill Mees, Lori Hagglund, Eric Seaman, and Nancy Bedan. The group developed e-mail messages, Facebook posts, and a postcard mailer to inform members and friends of the organization and to encourage donations. Columbia Audubon acknowledged gifts by e-mail messages and by cards.

Columbia Audubon is very grateful for donations received during the 2019 CoMoGives drive.

[Editor’s note: CAS is an affiliate member of CFM.]

In 1935, sportsmen from throughout Missouri came together to form the Conservation Federation of Missouri (CFM). They organized with the purpose of taking conservation out of politics. Their initiative petition campaign resulted in the creation of the Missouri Department of Conservation, a non-political conservation agency that has been a model for other states.

Since then, the Federation has undertaken many successful battles to ensure Missouri continues to be the leading state in conservation policies and funding. In 1976, CFM spearheaded successful passage of the conservation sales tax to create stable broad-based funding for Missouri’s forests, fauna, and fish.

Today CFM is the largest and most representative conservation group in Missouri. It is a citizen’s organization with over 100 affiliate organizations and thousands of members.

To bolster our collective voice regarding advocacy and legislative issues in the Capitol for the 2020 session, The Conservation Federation of Missouri has a new online legislative action center. It’s a tool to keep us informed and communicate more effectively directly with your elected officials on issues that are important to us all. We all want our powerful voices to be heard so that we may have a lasting impact for generations to come.

In order to upload your information to the system, all they need is your name, address and email address. You can submit your information by going to www.confedmo.org/lac and click on the “Sign Up”.  Your information will not be shared with any outside parties, and it’s only used to communicate with you on legislative issues. Thanks for your consideration and making our collective voices be heard loud and clear.

The November, December, and January board meetings focused primarily on the Boone County Nature School. Because these minutes are relevant to the upcoming vote of the membership on the Nature School topic (see above), the board conducted a vote by email to approve the minutes from recent meetings. Here are links to all of the newly approved minutes:

Here are a few notes about events sponsored by other entities that may be of interest to CAS members:

The Chat is published online on the first of every month from September through May. Submissions are welcome, including photographs, stories, and brief notes about bird or nature observations. Please contact News Editor Joanna Reuter with submissions, feedback, or suggestions for content. The submission deadline is the 25th of each month.