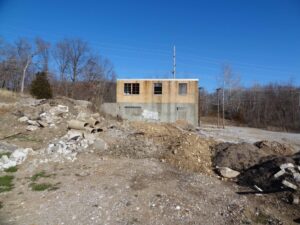 Pre-restoration of the 3M wetlands

In 2013-2014, Columbia Parks and Recreation Department approached Columbia Audubon Society and asked if we could provide a match to a grant for wetland restoration along the MKT. We were unclear of their demands, but it ended up that they were in need of plant lists and interpretive panel text and photos. Columbia Audubon stepped up to the plate and helped provide in-kind match for a grant that allowed for Columbia Parks and Rec to receive funding from 3M for a largescale wetland restoration project to benefit birds and all wildlife, while supporting native plants in a former sewage treatment area. We provided a plant list and interpretive text and photos of birds that we surmised would use the area after it has been restored. Today, the area is unrecognizable from what it was originally. And the wildlife that we suspected would move into the area certainly did, and many more species to our surprise. The 3M Wetlands project was the brainchild of retired Parks and Rec employee Brett O’Brien, and we hope that he recognizes his legacy for this wonderful place that has given wildlife and wildlife viewers so much pleasure through the years. CAS Board Member Lottie Bushmann is a teacher for Columbia Public Schools. When schools shut down for COVID-19 in March, Lottie spent a lot of her free time from remote teaching to visit the 3M Wetlands. Here’s her report on birding during quarantine: 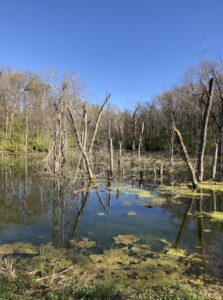 Open water at the 3M Wetlands. Photo by Lottie Bushmann

If you haven’t had a chance to bird at 3M Wetlands here in Columbia, you should give it a try. With our stay-at-home order this spring, I was able to visit there daily since it is just down the trail from where I live. I had been a regular visitor in the past (a couple of visits a month), but going every single day for three months was a real treat.

On most of my morning walks I averaged anywhere from 30-50 species. It really picked up during migration, of course, and I ended up with approximately 125 species over March, April and May, increasing my list of documented birds by 28 species!

The easiest way to get there is to park at the Forum Nature Area parking lot and head northeast on the MKT Trail through the tunnel. Almost immediately, you’ll come to a path that heads off to the left and takes you into the 3M Wetlands. Alternately, you can park at Forum Theaters and walk the concrete path down the hill. 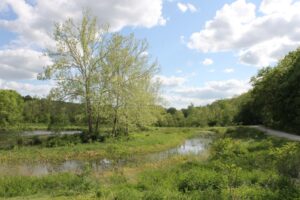 The 3M Wetlands are a wonderful place to study sparrows if you follow the mowed paths that lead off the trails, making a figure-8 pattern through the entire area. The city keeps up with the mowing, and if you wear good boots you can even access the trail that leads around the back side of the pond, the side closest to the MKT trail. This area is generally dry, but with lots of rain, it is recommended to wear rain boots or, at least, waterproof boots.

In April, the migrants made their way to the wetlands with Yellow-throated Warblers and Northern Parulas coming back early and filling the sycamores with their song. The two ditches on either side of the trail as one begins entering the trail were filled with Hermit and Swainson’s Thrushes, Ruby-crowned and Golden-crowned Kinglets, Louisiana and Northern Waterthrush, Eastern Bluebirds, Blue-gray Gnatcatchers, and White-breasted Nuthatches. Of course, throughout the month migrant warblers continued to move in, including Black-and-white, Prothonotary, Tennessee, Orange-crowned, Nashville, Kentucky, Common Yellowthroat, American Redstarts, Yellow, Blackpoll, Palm, and Black-throated Greens.  If you walk the concrete path that leads one up the hill from the concrete shelter towards the movie theater, you’ll find vireos mixed in with the warblers, including Red-eyed, Blue-headed, Yellow-throated, Warbling, and White-eyed. This is also where you’ll find the Red-Shouldered Hawk’s nest, and further up the hill near the theater parking lot is where the Cooper’s Hawk’s nest was located.

I think my favorite day in April was when I happened upon at least 18 Ruby-crowned Kinglets, all down at eye level, singing and hopping, working the trees, eating and chasing each other. I sat on the bench and watched them for over 30 minutes. It was absolutely magical. All were showing their trademark crown, but the males had them displayed more brightly than I had ever seen.

In May, the birding grew even better. More migrants moved in and nesting species begin setting up residency with their nests. There were at least five pairs of nesting Eastern Bluebirds spaced evenly throughout the area. Tree Swallows used the nesting boxes around the large pond, and Barn Swallows nested in the shelter. New migrants in May included Summer and Scarlet Tanagers, Philadelphia Vireos, as well as Rose-breasted Grosbeaks. I also witnessed Lincoln’s Sparrows—this is a reliable spot to get this species in spring or fall. New warblers in May included Canada, Mourning, Blue-winged, Golden-winged, Magnolia, Wilson’s, and Chestnut-sided, along with a surprising Swainson’s Warbler that decided to hang out here all month. 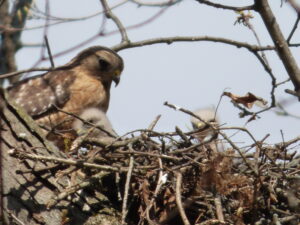 Young Red-shouldered Hawks in the nest at 3M Wetlands. Photo by Lottie Bushmann

The Red-shouldered Hawks that have nested regularly here for several years had a nest with four young that successfully fledged. They were fun to watch all of April, May and June. It was a part of my regular routine to walk up the concrete path to check on them. The nest was set back from the trail, but fairly visible most every day. I could always see at least 2 chicks and many days I witnessed the parents flying in with a meal. It was exciting to see the chicks every single day and to record the daily changes with photos. I never knew if all the chicks would survive, and it was exciting to have occasional days where I would see all four at one time. It was also very exciting to witness their fledging days and watch them awkwardly flap about and land on branches adjacent to their nest. It took many days of practice for them to permanently leave the nest. I also found it fascinating that two of the young hawks left the nest at least a week before the other two left. The parents continued to feed a single fledgling at least a week longer than the other three. I was excited to be there the day both adults were screaming at him and NOT bringing him any more food. It was actually pretty exciting. After that day I only saw them in the vicinity of the nest and around the upper pond. The four juveniles flew together for several more weeks through mid-July.

On May 12th, I had a real thrill as I was watching the hawk nest. A Black-billed Cuckoo flew in and hung around for a bit, giving me lots of time to snap pictures and admire him. I had seen quite a few Yellow-billed Cuckoos hanging around, but hadn’t seen a black-billed before.

I felt I was there the evening the Green Heron first returned in very late April. He landed at the top of the highest tree along the MKT trail, sang his croaking song, and then proceeded to fly tree to tree from the highest spot, calling out each time he landed. He circled the entire wetland, landing on at least six spots, for 20 minutes before descending down into the pond/wetland area below the shelter.  That area has also been host to American Bitterns and Soras during April and May.

Red-headed Woodpeckers have become regular residents in the last several years, and if one visits the 3M Wetlands any time in June, July or August, there are likely such easy views of them that you don’t even need binoculars. I know there were at least three nesting pairs this summer.

Barred Owls also nest here. One day, I happened upon the adult female with her 4 young as they were begging to be fed; owlets make a really rasping sound as they beg for their meals. They love to hang out in the trees along the MKT Trail on the 3M Wetlands side.

If you walk there anytime over the summer, you’re likely to see many species’ fledglings following their parents and being fed. One morning it was five Carolina Wren babies all lined up on a branch. Another day the Barn Swallows were spread out around the shelter sitting on all the signs and picnic tables, while the Red-shoulder Hawk siblings were practicing flight around the big pond uphill from the shelter. Kingfishers regularly rattled and flew between the many dead tree stumps that weren’t being used by the hawks. House Finches successfully used an old Barn Swallow nest, and later the same nest was used again by Barn Swallows. One day early in the summer, I happened upon three Wood Duck mommas who collectively were watching 33 chicks. I didn’t realize that Wood Ducks used a crèche to watch their young. It was a bit sad to see the number of ducklings dwindle to less than 10 by July.

One day I watched a Pied-billed Grebe eat a fish that was at least twice as big as his head. It took awhile to happen, but he did it!

It was fun to watch the Blue-gray Gnatcatchers mob the Red-shouldered Hawk fledglings. This wasn’t a one-time thing either-it happened on most days. They would buzz all around the head of the hawks and often would hit them on the back of the neck. It would go on for easily 10 minutes before the hawk might move on, or jump over to a new perch. They hardly seemed to even notice the gnatcatchers. 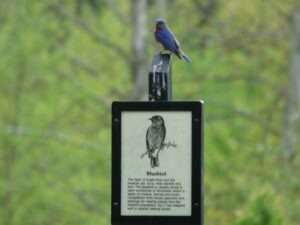 Some days were hard. As I walked up to the pond on the high side of the shelter I saw the bluebird parents were going crazy. I could see 18 inches of black water snake hanging out of their nest hole in the dead tree. I found it difficult to watch and was sad to see him still hanging there when I walked by 20 minutes later. I remember an instructor at Hog Island telling us (after a Great-horned Owl killed one of the resident Osprey chicks) that nature wasn’t evil—rather he preferred to think of it as sometimes harsh. This was definitely a harsh moment.  Equally harsh was the day I stood in the shelter and heard a Wood Duck momma start screaming (and I mean screaming!). Another birder wondered out loud if a snapping turtle was perhaps getting one of her young.

There is also a lot of other wildlife to enjoy.  There was one deer family that I felt I saw regularly that had twin fawns. I regularly saw many turtles sunning themselves and crossing the trail. One day I happened upon a rather large snapping turtle on the trail, but I didn’t bother him and he left me alone. There are several resident muskrats who are busy building. I’ve been told there is a beaver that lives there, but I’ve yet to see him myself. There is a lot of tree damage that certainly is evidence of a beaver.  Of course, lots of frogs and other reptiles make it a rich environment. I also noticed quite a few people fishing earlier in the summer at the upper pond by the shelter. When I queried one young man what he was fishing for, he told me there were Large-mouth Bass in the pond. Now, I don’t know what I thought he was going to tell me (Perch?) but that was not the answer I expected. Anyhow, several other folks confirmed that to be true.  There are many native flowers playing host to many butterflies and bugs this summer.

All in all, 3M is a vibrant place with lots going on.  It is a rich ecosystem for us all to enjoy. I can only imagine how spectacular it will be when the bush honeysuckle is eradicated. That’s a project for sometime soon I hope.